Do you know what the Irish shamrock symbol means? 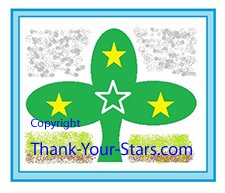 Is it a sham? Is it a rock? No, it's a 3-leaf clover, an important symbol of the Irish heritage.


The Story of the Shamrock

In the 4th century, Ireland was a pagan country. Patrick was captured and brought to Ireland as a slave. He was a shepherd for 6 years under a cruel master. Then he escaped with the help of God.

Read more about the true story of the life and work of Saint Patrick.


The Shamrock is a Symbol of the Holy Trinity

Years later Patrick came back as a Christian missionary to bring God's hope and salvation to the people.

At first, he met with stiff resistance. The pagan chiefs and all the people were under the spell of the Druid priests. Patrick worked many miracles to show that his God was much more powerful than the pagan gods.

So Patrick preached in front of the chiefs. They wanted to hear more. But they could not understand the mystery of the Holy Trinity, how there could be one God in 3 persons, the Father, the Son (Jesus Christ) and the Holy Spirit - and all three still be one God.

After all, it is a mystery. But it was the big "hang up" puzzling the chiefs, and keeping them skeptical of Patrick's teaching.

Patrick was praying to God for help. He looked down on the ground, and saw a 3 leaf clover. He picked it up, and showed it to the chiefs. He told them how it had 3 leaves, but still one stem, it was all one plant.

Nobody can completely understand the mystery of the Holy Trinity, but this helped the chiefs understand what Patrick was saying, and many of them converted to Christianity.

The chiefs allowed Patrick and his companions to go anywhere in Ireland and teach the people about the true God.

They can be made out of green paper, green felt, or similar material.

Or they can be purchased as a lapel pin, and used for many years to come.

These next 2 images show the front and back of a lapel pin I've worn for many years. 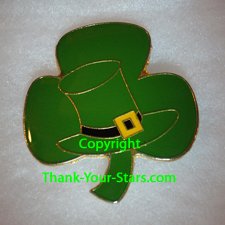 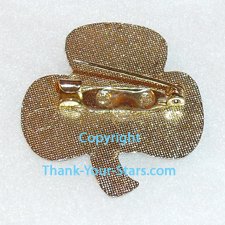 Where the Irish Shamrock Symbol Comes From

These next three photos are types of clover that have 3 leaves, known as the 3-leaf or 3-leaved clover.

The shamrock is thought to be young clover. On many shamrocks each of the leaves is heart-shaped. (There's an indentation at the end of each leaf, making each leaf look like a little green heart.)

These next photos are some clovers that bloom in late spring and early summer - usually by June. 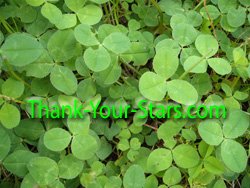 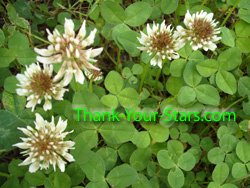 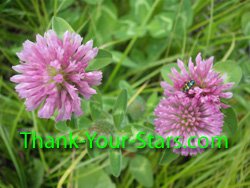