Mary, Our Lady of Perpetual Help Story
& the Meaning of the Stars on Her Forehead 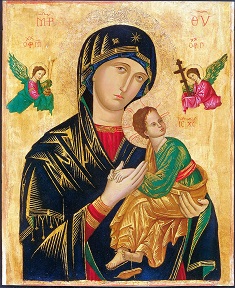 June 27th is the Yearly Feastday of Mary, Mother of Perpetual Help.


In this image of Mary, known as Our Mother of Perpetual Help, you can see 2 stars on the head of Mary.


Mary is one of the most beautiful, brightest Stars in Heaven.


This website, Thank-Your-Stars.com, is dedicated to Mary and is under Her powerful protection.

The Story of the Image

This image is painted on wood. It is about 20 inches high and 16 inches wide.

It is thought that this picture was originally painted by St. Luke, the writer of the 3rd Gospel, while Mary was still alive. If it is not the original, it is likely a copy of it. According to tradition, when Mary saw the image, she blessed both Luke and the painting, saying, "My grace will accompany it."

For years this picture was venerated in Crete, where it was known as Our Lady of the Angels.

In 1480 a merchant stole it from Crete and took it to Rome. While on the ship, a great storm happened, the sailors prayed, and they survived. Then the merchant got sick and was dying. He told a friend the story, and asked him to place it in a church. The wife of the friend did not want to have the picture removed, and kept it in her bedroom for 9 months. Mary appeared to the friend several times, his wife still wanted to keep the picture, Mary warned him he would die if he didn't obey, and he died because he didn't promptly obey.

Then Mary, calling herself "Holy Mary of Perpetual Help", appeared to the 9 year old daughter and told her to tell her mother and grandfather to obey, otherwise they would all die. Mary appeared again also to the mother. After delays and troubles, they took the picture to where Mary told them, the church of St Matthew between St. Mary Major and St. John Lateran. That first day a paralyzed man was cured. For about 300 years Mary was venerated in the simple small church working many miracles.

In 1798 Napoleon's governor destroyed 30 churches in Rome including St. Matthew's. The precious image was taken to the Church of St. Eusebius, where it stayed for 21 years. Then it was taken to Santa Maria in Posterula, further away. where it remained in the monastery chapel, unknown to the public, and even forgotten by many of the monks.

But one of the monks, Brother Augustine, was very devoted to Mary. His duties included caring for the sacristy and cleaning the chapel where the picture of Mary was, and he spent much of his free time venerating Mary in front of her picture. Brother Augustine trained many altar boys - one of them was a young man named Michael. Around 1850, Brother Augustine would often point out the picture to him and say, "Remember this picture, Michael. It is very old. It used to be in the church of Saint Matthew. Remember it!" (Brother Augustine died a few years later in 1852 or 1853 at the age of 86.)

In 1855 the Redemptorists - (a congregation of priests and brothers founded by St. Alphonsus de Ligouri, who died in 1786. He wrote books and was especially devoted to the Most Blessed Virgin Mary) - obtained the property with the ruins of a church. They didn't know it was where St. Matthew's church stood 50 years earlier. They built a new church with the title of St. Alphonsus.

The once altar boy Michael joined the Redemptorist community at St. Matthews and was ordained in 1859. The Redemptorists found documents about the church of St. Matthew being on their property, and that it had had a miraculous image. When he heard about it, Fr. Michael told them he know where the picture was and that he had seen it many times.

In 1863, a Jesuit priest gave lectures on famous pictures of Our Lady in Rome. He spoke of the Perpetual Help image that had disappeared for 70 years, and asked if any of the listeners knew where it was, asking the owner to make it available for public devotion between the 2 churches Mary had requested.

The Redemptorists prayed for several years for guidance. They went to the pope and told him the history.

The pope approved their request to have the forgotten dusty picture taken from the chapel of Santa Maria, and brought to their church.

The pope asked that they also replace the image at Santa Maria with another suitable picture (which they did a couple years later by giving the Augustinian community a painted copy of the Mary's picture).

The pope told the Redemptorists, "Make Our Mother of Perpetual Help known throughout the entire world." This is how Mary's image and devotion has since spread to many countries.

A solemn procession brought the image of Mary to her chosen home on April 26, 1866. Houses were decorated with flowers, vines, banners, flags. Several miracles happened during the procession.

In the next several decades hundreds of miraculous cures were authenticated. So many people came that a bigger church was built to replace the wooden church, but still it could not hold the thousands who came to the miraculous image in those early years.


Meaning of the stars on Mary's Head

In the center of the veil on Mary's head is an 8-pointed star, similar to the ones found on the image of Our Lady of Guadalupe.

It represents Mary as the morning star, the dawn that precedes the daylight of Jesus.

Mary is called the Star of the Sea. Like a lighthouse that brings ships to safety in the dark night, Mary shows us the way to salvation in the spiritual darkness of our sin-filled world.

To the left of the star on Mary's forehead, there is what appears to be another ornate 4 pointed star - it is a symbol of the cross, which represents Jesus, and is a reminder that Mary stood on Calvary at the foot of cross on which Jesus was crucified and died for us.

It is also a reminder that Mary was the first fruit and most faithful recipient of the sufferings and sacrifice of her Son Jesus, and as a spiritual mother, obtains graces and blessings for us, bought at so dear a price - the infinite price of our salvation and redemption, the infinite price of the Precious Body and Blood of Jesus sacrificed for us, which Jesus could do at the end of his life on earth because Mary gifted her own body and blood to him when she said yes to God's plan at the beginning of his life on earth. (Luke 1:38).

In the image, 2 angels are bringing the instruments of the sufferings and death of Jesus - Jesus runs to his mother Mary so fast one of his sandals is slipping off - Jesus is held seated in the left arm and hand of Mary - Jesus looks to Mary and puts his hands in her right hand - but Mary looks to us with a sweetly sad expression, as if asking, what are you doing to stop terrorizing and crucifying my beloved Son by your sins?

She is also looking at us because She is always here for us, paying close attention to our every prayer. Which is why she is called Our Lady of Perpetual Help - Our Mother of Perpetual Help. As our good Heavenly Mother, Mary is always looking out for the best for us.

The miraculous image can still be seen in the church of Saint Alphonsus in Rome. The church is simple looking on the outside, but the treasure is on the inside.

Just like Mary, who on earth lived a hidden life.

But for us who take a closer look, we shall learn the truth ... especially when we arrive in heaven ... how bright and shining a Star Mary really is!

Mary is one of the most beautiful, brightest Stars in Heaven ... and on earth ... to help us perpetually.