Mary's Gift, the Miraculous Medal
- A Story of Miracles -
and What the Stars Signify 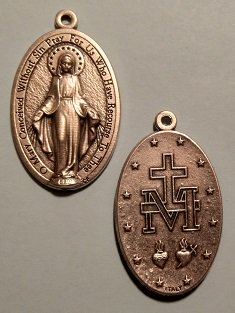 November 27th is the Yearly Feastday of Mary's Miraculous Medal.


What is the story of this medal? Why is it called miraculous? What do the stars represent?


This website, Thank-Your-Stars.com, is dedicated to Mary and is under Her powerful protection.


Mary is one of the most beautiful stars in heaven, shining brightly to help and guide us here on earth.


This is why so many traditional, venerable, and historical images of Mary show one or more stars.


The Images and Symbols on the Miraculous Medal

On the front of the Miraculous Medal we see an image of the Blessed Virgin Mary with outstretched arms with rays coming from her hands. Mary is standing on a serpent on a globe with the year 1830 on it. There are 12 stars around her head. Around the front image of the medal are the words of this prayer - "O Mary conceived without sin, pray for us who have recourse to Thee."

On the reverse side of the medal we see the cross of Jesus on top a vertical bar (representing an altar) and the letter M (representing Mary). The 2 hearts underneath represent the great love of Jesus and Mary for us. Around this image are 12 stars.


The Story of the Miraculous Medal

Especially if you - or someone you know - needs a miracle, a conversion, a healing - this story is for you.

In July of 1830, Mary appeared in the middle of the night to a simple young girl, Catherine Laboure, who had recently joined a religious community, and was living in Paris, France.

She had lost her mother when she was 9 years old. After the funeral, she stood on a chair, took a statue of Mary from the wall, kissed it, and told Mary - You are to be my mother.

Catherine was 24 years old, when in the middle of the night a young boy woke her up, she dressed, and the boy took her to the chapel. Mary came and was seated, Catherine knelt with her hands in Mary's lap. They talked with one another for several hours. Mary revealed special things to Catherine.

In November that year, while praying in chapel, Mary again appeared on a globe and asked that a medal be struck with the design Mary gave. Mary said that those who wear it "with confidence' would receive abundant graces. (Graces are blessings and favors from God.) Mary asked that we pray often the prayer on the reverse image of the medal, "O Mary conceived without sin, pray for us who have recourse to Thee", not only for ourselves, but also for others.

For 2 years, Catherine's spiritual director delayed getting the medal made, until he was told by the archbishop of Paris to act on it.

Millions and millions of medals were made out of gold, silver, and regular metal.

It is estimated that within the first 10 years at least 100 million medals were struck.


Why is the Medal called Miraculous?

Why was there such a demand for the medal? What was happening?

The Blessed Virgin Mary had asked that the medal be called "The Medal of the Immaculate Conception".

But so many people were converted or healed, who started wearing and using the medal, that everyone started calling it the Miraculous Medal.

Those who wore the medal with confidence received many favors.

There were many cases where someone would often pray the prayer "O Mary conceived without sin, pray for us who have recourse to Thee.", and place the medal near a sick or dying person, or hide a medal somewhere in the room of an unrepentant sinful person, and that person would be healed or converted.

Some pastors have made the comment that all Mary asks is that we let Her get a foot in the door, then She can do the rest of the work with her loving motherly heart to work her miracles, and to obtain miracles, blessings, and favors from Heaven.

So she prays for us, asking her son Jesus for favors and blessing for us.

Jesus is a good obedient Jewish boy, and he has to do what his mother asks - and he especially wants to.

Because Mary never refused God anything - even at great sacrifice of seeing her Son tortured and dying on the cross - God cannot refuse Mary anything.

Several years ago a pastor in England told the true story of the power of the Miraculous Medal on a young man on death row for murder in the United States of America in the 1940's. You can watch or hear the story here.

The last book of the bible is called the Book of Revelation (or Apocalypse from the Greek).

In chapter 12 we find a description of Mary, the Woman clothed with the Sun, and the moon under her feet, and on her head a crown of 12 stars. Mary fights against the red dragon.

Today, we certainly need help to fight the many deceptions and attacks by the devil.

Turning to Mary for help is the fastest, easiest, shortest, most secure way to get help from God.

Not only does Mary pray effectively for us, she also crushes the head of the serpent as God promised in Genesis, when He said to the serpent, the devil, "I set an enmity between you and the Woman, between Her offspring and your offspring. She will crush your head, and you will lie in wait for her heel." (Genesis 3:15)

Here are various bible verses with the number 12, here are some:

This is represented on the reverse side of the Miraculous Medal by 12 stars surrounding a cross on top a bar in the M below. The cross represents Jesus sacrifice, the bar represents the altar of sacrifice, and the M represents Mary, whose heart is an altar for God and whose soul and heart was pierced by the sword (Luke 2:35) as depicted in the hearts underneath the symbol, which represents the great love of Jesus and Mary for us.

Jesus and Mary are considered the 2 olive trees on either side of the river of life, that produce 12 fruits, one fresh each month. (Revelation 22)

Jesus and Mary are truly the stars of our lives, throughout our history, and for all of humanity.

Mary is one of the most beautiful, brightest Stars in Heaven.

This is why there are so many images of Mary with stars.