The Story of Mary,
Our Lady of Czestochowa,
"The Black Madonna"
Star, Queen, and Mother of Poland 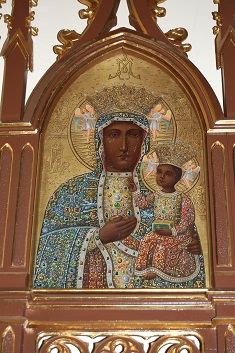 August 26th is the Yearly Feastday of Mary, Our Lady of Czestochowa.

This image of Mary is known as Our Lady of Czestochowa.

Czestochowa is the town in Poland where this image has been venerated and celebrated for hundreds of years.

To many of us, it is a very strange name. How do you pronounce it?

The polish pronunciation is "chess-tuh-hoe-vuh"

Mary is one of the most beautiful, brightest Stars in Heaven.


The Origin of the Image

This image is painted on wood, and is in the monastery-fortress church of Jasna Gora in the town of Chestochowa, Poland.

From ancient tradition, it is thought that this is one of the 3 icons painted by St. Luke in the presence of Mary while she was still alive.

The other 2 are "Our Mother of Perpetual Help" in the Redemptorist church of Saint Alphonsus in Rome, Italy, and Salus Populi Romani ("Health- or Salvation - of the Roman People) in the Pauline Chapel of the Papal Basilica Church of Saint Mary Major, also in Rome.

The Empress Saint Helena, who died in 330, is famous for discovering the true cross of Jesus in Jerusalem - and this was confirmed by miracles - while on pilgrimage to the Holy Land.

Saint Helena also discovered this icon picture of Mary in Jerusalem at that time. She brought it back to Constantinople, where her son, the emperor Constantine, built a church for it. At one time, the city of Constantinople was under seige by the Muslims. This icon was placed on the wall of the city, and the Muslim army became so frightened they fled.

This icon remained in Constantinople for about 500 years, until it was bestowed as a dowry and taken to a region in Russia that later became Poland.


First Known Attack on the Image

In the 15th century, Saint Ladislaus, the king of Poland, put the image in his castle. The Tartar invaders lay siege to his castle. One of their arrows pierced the throat of Mary in the icon. To this day the scar remains on the icon despite many attempts to paint over it.

To protect it from more attacks, Saint Ladislaus set out to take the icon to Opala, the town where he was born.

On the way he stopped at the city of Czestochowa to take a rest. There he placed the image overnight in the church of the Assumption at Jasna Gora (which means "Bright Hill").

The next morning, August 26, 1382, the horses pulling the carriage with the image would not move. Saint Ladislaus took this as a sign, and had the icon installed in the Church of the Assumption, and put the sanctuary and monastery into the care of the Pauline Fathers.

He then established August 26th as the yearly feast of Our Lady of Czestochowa.

There's a lesson to learn from this story. As a wonderful independent truly free human being, the Blessed Virgin Mary goes where she wants. In reality, She knows where she can do the most good for mankind.


Another Attack on Mary

In 1430 a group of Hussites - followers of the heretic John Hus from Prague - attacked the monastery and stole the image of Mary.

They put it in a wagon and were taking off when suddenly the wagon stopped and could not be moved.

The attackers threw the image to the ground. It broke into 3 pieces.

One of the men took his sword and struck the image twice on the cheek, leaving two deep scars.

On his third attempt, he fell to the ground in agony and soon died.

Like the scar on the throat, the scars on the cheek remain, despite any attempts to remove them. There's several lessons to learn from this story.

Mary is the Mother of Sorrows, and has endured so much suffering from ungrateful men throughout history, especially by their sins that put Her Most Beloved Son on the cross.

But God has a limit. God protects Mary.

She is the closest in the Very Family of God.

While Her Heart cries out for mercy for sinners, God at some point says Enough !!!

So many people - including Protestants, Lutherans, and even "Christians" - have great disrespect for Mary, if not outright blaspheme and hate Her.

In this, they are terribly deceived, and are actually instruments of the devil.

If Jesus can say, "What you do to the least of the brethren you do to Me", how much more will He judge those who attacked His Very Own Mother, and do not repent of it.

This story also shows the importance of holding in veneration holy places and things, such as churches, temples, shrines, crucifixes, images and statues of Christ, His Mother Mary, and holy persons throughout history.

An attack on a holy place or thing is an attack on that person as well as God Himself.

How would you feel if someone came into your home and spit on images of your family on the wall, attacked them, tore them up.

They would no longer be welcome.

So many people who think they are headed to heaven would not be welcome in Heaven unless they repent in time and make reparation for their offenses against God and His family and friends.

God will not be mocked.

Do not be deceived, God is not mocked. A man reaps what he sows (Galatians 6:7)

They conquered most of Poland and ousted King John Casmir of Poland from Krakow in the south.

Then General Miller ordered forces to attack the monastery fortress of Jasna Gora, where Mary's icon and presence was honored.

40 monks, workers, servants, soldiers, and some nobles - all numbering about 300 people - led by Father Augustyn Kordecki, held out during the 40 day siege in November and December 1655 - despite terrible attacks by numerous cannon, messages of misinformation, pleas to surrender.

General Miller made promises, but the truth was that the Protestant soldiers were burning churches, murdering pastors and causing great ruin.

The religious and faithful prayed, held devotions, asking desperately and continually for help from Heaven.

Miraculously, the enemy saw a woman - whom many of them blasphemously called a witch - helping those defending the ramparts, supplying the cannon balls and even aiming the cannon.

One enemy cannon ball miraculously bounced off the wall as a ball of flames, destroying the cannon and killing the gunner.

At times a mysterious fog covered the hill. Despite the odds, the enemy was being destroyed.

Mary even appeared to General Miller himself. Finally, shortly after Christmas, the siege was lifted.

Eventually Poland rose up in great numbers against the invaders and beat them, especially as they learned of the terrible atrocities the enemy had done.

Here's an important lesson to learn:

While Mary is the most loving woman that ever existed, like a woman, Mary also is "terrible as an army set in battle array" to the enemies of God and His People.

You are beautiful, O my love, sweet and comely as Jerusalem: terrible as armies set in battle array. (Song of Solomon 6:4)

"Who is She that comes forth as the morning rising, fair as the moon, bright as the sun, terrible as an army set in battle array?" (Song of Solomon 6:9)

If you dare to fight against Mary or Her People, you are doing the work of the devil and you are fighting God - and you will quickly end up a complete loser.

Even if you think you have great numbers - even millions or billions on your side - you will lose.

Better hurry up and repent and get on the winning side. Mary is God's greatest most powerful secret weapon.


Mary is Powerful against Communism

Over the centuries, Poland has paid a terrible price of sacrifice, suffering and death to keep the faith, and to fight against enemies on all sides, and to assist other countries in the fight against evil forces.

The Polish people have been the butt of crude jokes, called "Polish jokes", which usually belittle them and their abilities.

The Polish suffered terribly against and under Nazi Germany occupation, and under Soviet Russia occupation.

Was it worth it? Yes, yes, yes !!! In heaven we will find the rich reward for those who live, pray, sacrifice, suffer, and die for the cause of faith and freedom to practice faith.

The devil always has a hatred for Mary, who crushes his proud head.

During all the years when Poland was occupied by Communist forces, the Polish people continued to go on pilgrimage to the Shrine of the Blessed Virgin Mary, Our Lady of Czestochowa.

Even when they were forbidden, the people continued to come.

When the forces of evil barricaded the roads, massive processions of people simple walked through the barricades.

Nothing and no one can stop a people energized by Heaven to honor Mary, the greatest Woman ever to walk the earth.

No one can stop Mary to help those who turn to her and trust in her for help.

If we wish to be free, turn to Mary. Again, she is an army set in battle array.


The Star on Mary's Forehead

Like many of Mary's icon images, there is a star on the forehead of Mary, Our Lady of Czestochowa.

Because the icon is covered in ornate metal work, this normally can't be seen.

But if you look at images of the original painting on wood, there is a star on the blue veil on the forehead of Mary.

Mary is one of the most beautiful, brightest Stars in Heaven ... and on earth ... to help us perpetually.