The Story of Mary
Appearing to Little Paul
in 1841 in Montana, USA 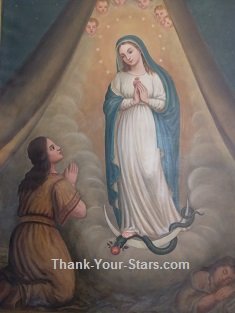 This apparition of Mary happened over 150 years ago, in 1841, to an Indian boy known as Little Paul, in an area now known as Montana in the United States of America.

Mary appeared with a single star over her forehead.

It is most likely the Christmas star, because this happened just a few week before Christmas.

Like the Christmas star that led the Wise Men to Jesus, Mary does the same.

There is a car bumper sticker that says, "Wise Men still seek Him."

But another bumper sticker says, "Wise Men still find Him with Mary." 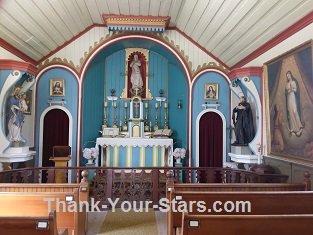 This image shows the small sanctuary inside St. Mary's Mission Church. in Stevensville, Montana, about 30 miles south of Missoula.


The paint colors were made from clays, plants, berries etc. that the native people used.


The statues and paintings were either done at the mission or imported from Europe.

The Immaculate Conception statue over the altar is carved from 3 pieces of pine wood, and the black Saint Ignatius is cloth over wire.

Both of these were done by the first Jesuit pastor, Father Ravalli, a very gifted man, who worked at this mission for about 20 years in the mid 1800's - over 150 years ago.


The Story of the Apparition

In the large painting to the right of the sanctuary, we see a combination of the Immaculate Conception and Immaculate Heart of Mary, in her apparition to "Little Paul", an 11 year old Indian boy.

The Jesuits had arrived in September 1841. Many of the Indians were ready to receive Baptism by Christmas that year.

Little Paul could not remember his prayers, as hard as he tried, and as much as he asked Heaven for help. He was told he could not be baptized or receive first Holy Communion.

Shortly before Christmas 1841, the Most Blessed Virgin Mary appeared to Little Paul while sleeping, that's why you also see him sleeping in the lower right of the picture.

Little Paul died about 2 years later. Mary also told him she was pleased that the first Mission here would be named after her.

The town also was called Saint Mary's, until it was changed to Stevensville in 1864 after the territorial governor.

And it is to the everlasting shame of some US government officials at that time, a few decades later, that for 20 years, they closed most of the numerous Catholic missions and sent in Protestant preachers, whom the Indians did not want.

I wonder how many of them are getting crushed along with the serpent in hell right now and forever for their damage to and hatred of the tremendous good brought by the Catholic missionaries.

Let's hope they repented before it was too late.


The Story of the Mission Church 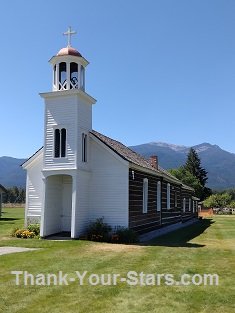 The Faith first came to the northwest United States of America in 1841.

Some Iroquois Indians were traveling with the Hudson Bay Company, looking for better trapping and hunting grounds.

They told the Salish (Flathead) Indians how the blackrobes were teaching that the Great Spirit sent His Son to show us the way to heaven.

Upon hearing this, the Indian chief and his son sent 4 separate delegations to Saint Louis, Missouri, to plead with the Jesuits to send one of them to their people, and they would guide them back through many mountains. The Jesuits said they had no one to send, busy with many missions and duties.

On the 4th time, Father De Smet, who had heard of their big efforts, rejoiced he was finally there to meet them, and begged his superiors to let him and some others go.

They arrived to the natives in the Bitterroot valley of what is now western Montana, and close to Idaho, in September 1841.

Several months after his baptism, the old chief died, happy to see his dream fulfilled. His son became the next chief.

The Jesuits also set up missions to the north of Missoula (St. Ignatius in Montana) and west among the Coeur d'Alene Indians (Sacred Heart in Idaho).

Every year around August 15th, a group of people from the area climb St. Mary's peak (above the church chimney in the image) for Mass on the summit, a practice the first missionaries started many years ago.

It is a long climb. After a long dusty drive, there's a hike 3.5 miles each way. The summit is above the tree line, there is often snow in the area. Sudden storms - with cold, rain, and wind - can happen even in summer.


Mary is our Star

In this apparition, Mary appeared with a single star over her forehead.

It is most likely the Christmas star, because this happened just a few week before Christmas.

Like the Christmas star that led the Wise Men to Jesus, Mary does the same.

You may have seen the bumper sticker on cars that says, "Wise Men still seek Him."

But there is also a bumper sticker that says, "Wise Men still find Him with Mary."

Mary is one of the most beautiful, brightest Stars in Heaven ... and on earth ... to help us in all our needs.